The way someone grooving on their iPod or other music player will spit out random bits of whatever song they are listening to, sharing them with the world.  Usually the worst bits and probably out of tune.

Several years ago, when I was commuting by bus — on the glorious MT 7 route up Rainier Ave. — a teenage boy in the back of the bus was suffering from this.  Swaying slightly in his seat, he suddenly sang out “Fuck you!”, then a second later “I’m gonna fuck you, girl!”  Presumably the song by MITCH.


Randomly inserting Bible verse numbers into your speech, especially by Christianists promoting their agenda on the news.  The verse numbers usually do have contextual meaning, but only to people who already know the referenced bits by heart.

In computer programming terms, this is “indirection” — pointing to something that points to what you means.  Used to be that they would include the actual verse, but with sound bite news these days, there’s no time for extraneous words, so they just spit out “Ephesians 2:8” in the middle of a sentence and go back to their talking point.  This Victoria Jackson video on CNN inspired the phrase; you can read her followup blog posting and see that Bible Tourettes populates her writing, too.


Blurting out quotes from show tunes and TV and movies and comedy sketches in the middle of conversation.

Visit gay bars, you’ll hear it.  Or visit science fiction conventions and hang around the Trekkers and the Whovians; same difference, different source.  As with Bible Tourettes, there is contextual meaning to those who know the quote, although rather than indirection, this is bonding over shared cultural touchpoints.

(With apologies to those who suffer from genuine Tourette Syndrome, and to drag performer Pussy Tourette, who frankly looked better in drag than when backstage preparing to dress.  You can catch some of her music on Rhapsody.)

What Were They Thinking?
— Shopping?  Meh. 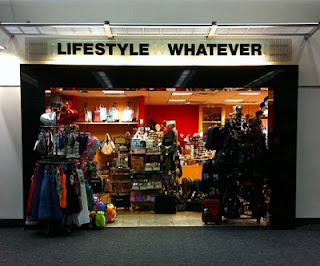 This is one of those airport stores that you go into during your layover between flights, not because they have anything you want but just to pass the time.  (This one is at the end of one of the terminals at SFO, near Gate 74.)  Sells “travel goods and accessories for humans and pets,” according to the Shopping at SFO page.

Under that idea, maybe it’s also “Most Accurate.  Store Name.  Ever.” 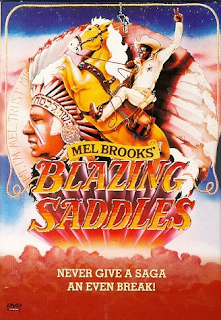 I recently watched the classic Mel Brooks’ Western comedy Blazing Saddles, as part of my quest to refresh on all the Mel Brooks movies.  (I also watched The Producers — the original one — soon after.)  I’m not sure I had ever seen this one before.

It was interesting seeing (hearing) the word “nigger” being used abundantly during the film.  Admittedly, it was done to make a point rather than as casual dialogue.  According to the bonus features, this was controversial even at the time, with some actors declining to take a role where they would have to say the word.  Today, I don’t think you could get the movie into the theaters; in a drama or a documentary, said by someone clearly depicted as “bad”, yes, but not in a comedy with the word being used by general populace characters.

The most interesting part of this DVD was extras, which include a number of alternate versions or extended scenes done for the television version.  Yes, extended versions: some scenes edited for the movie were actually restored for TV.  When does that ever happen any more?

No idea if “nigger” made it onto the TV; I expect not, given the other bits which did not.  Particularly noted in the behind the scenes stuff was the campfire bean-eating scene, where they had to remove all the fart sounds, leaving the cowboys mysteriously standing up and sitting down repeatedly, in a weird slow motion dance.  Also of note was Madeline Kahn’s character, whose last name (“Shtupp”, meaning “stuff” in Yiddish, a double entendre) couldn’t be said on TV, so she gets introduced as “Lili von…”.

(Side angle: while the use of “nigger” throughout the film was shocking and bizarre based on what we are used to today, stuff like the campfire farting scene slides by as trite and common juvenalia.  But it isn’t, or at least it wasn’t: apparently this is the first movie fart joke of the sort.  This is the prototype.  Mel Brooks is to blame for all those fart jokes we endure in inane comedies today.  Sigh.)

(Per IMDB trivia on the film, the fart sounds are from the old “soaped up armpit” method.)

In the end, Blazing Saddles is more of a curiosity today than a landmark, but Brooks is apparently working to recraft it for Broadway.  Then again, I saw the original version of The Producers a couple weeks after seeing this, and compared to the stage version (I haven’t yet seen the movie version of the stage version), it also feels quite remote.  Brooks did a fantastic job reconfiguring that film for the stage, so I have some hopes for Blazing Saddles on Broadway.  (Then again, I didn’t think Young Frankenstein did all that great on stage.)

But God knows how he’s going to manage to get “Nobody move or the nigger gets it!” in there.

This was my coat check ticket a couple weeks ago.

What Were They Thinking?
— Seattle’s Worst Advertising 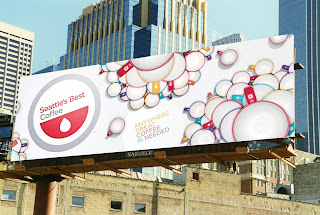 Billboards from Seattle’s Best Coffee have started cropping up around Seattle.  A more square version of this one (“Anywhere Great Coffee Is Needed”) has been up above my chiropractor’s office for about a month.

The first time I saw it, I took it for a flat presentation of colored circles, each with a USB drive sticking out of it.  I’m not alone in that: I showed a pic of that billboard to Cliff and he said “What’s that?  Bubbles?”

(What it is meant to be, of course, is stacked coffee cups, seen from above.  Unfortunately, seen directly from above, you lose perspective [ahem] on what you are looking at, and the brain is free to make other connections.)

In the wake of the recent logo rebranding of Seattle’s Best Coffee — where a major complaint was “Why is the ‘coffee’ in the logo red?  This looks like the logo for a blood bank” — you would think they would want advertising that is clear.

And maybe advertising that actually includes coffee.  Because an ad full of clean, empty coffee cups kind of implies that they are waiting for coffee.  Apparently for something other than Seattle’s Best Coffee.

This site doesn’t think they are very good ads, either.

Email ThisBlogThis!Share to TwitterShare to FacebookShare to Pinterest
Labels: advertising, coffee, What were they thinking


The seafood restaurant Jake’s in downtown Portland (near Powell’s Books) had this huge inflatable King Crab on its roof this past weekend. 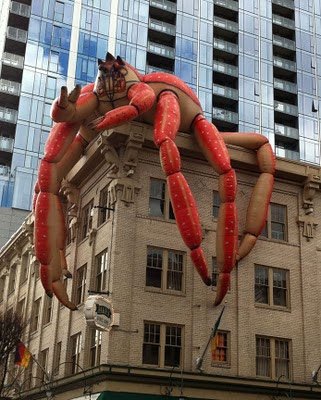 Is This Better When I’m Not Listening?


To date, there have only been three country songs that I actively despise.  (These would be “hit” songs, of course, ones with enough radio airplay to boost them from “I don’t like this but won’t likely hear it again” to “God, I hate this, change the station!  Make it stop!”)

Those would be:
But they are now joined by a fourth, currently #1 on the Billboard Country charts, Blake Shelton’s “Who Are You When I’m Not Looking?” (also heard on Joe Nichols’ album from 2007, but not released as a single then — probably for good reason!).  Check out these first-verse lyrics:


My oh my, you’re so good-looking
Hold yourself together like a pair of bookends
But I’ve not tasted all your cooking
Who are you when I’m not looking?

Gack.  Make it stop.  Banal.  Insipid.  Lyrics that don’t add up to anything.  The second line doesn’t even rhyme.  (And I’m generally forgiving more forgiving about whether or not something rhymes when it is sung.)

No one has tasted all of my cooking, hon, not even me!  I keep making new stuff.  That pan-fried tilapia with paprika and bacon fat last night was nummy.