What Were They Thinking?
— Rub-a-Dub-Dub

“What Were They Thinking?” highlights products and presentations which just don’t make sense. 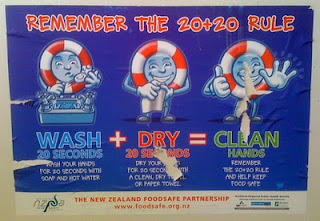 When I was in New Zealand a year ago, this sign was in the public restroom at the park in Taupo.  (Click it to see a larger view.)

While it’s always good to remind people about this stuff:
Kind of reduces the value of the reminder, huh?

Email ThisBlogThis!Share to TwitterShare to FacebookShare to Pinterest
Labels: health, New Zealand, What were they thinking


“Forget World Peace… Visualize Using Your Turn Signal” — that’s what the bumper sticker I remember from the 90s said.  And no place needs it to come back more than Seattle.

Not to say that Seattle drivers don’t user their turn signals.  They do.  Most of them do every time they make a turn.  The problem is, they don’t use them until they make the turn.  (Hint: it’s intended to signal what you’re going to do, not what you are doing.  It’s supposed to be a help to other drivers, so they can drive more efficiently, and so they can give you space to turn rather than hitting you when you suddenly lurch out into their lane.)

The light turns green, and Seattle drivers just sit there, or maybe they creep halfway into the intersection.  Are they asleep?  Are they playing with their phone?  (Probably.)  Are they waiting for ducklings or little old ladies to finish crossing the street?  Did they stall out?  You’re a car or two back, so you can’t tell.  All you really know is that they are sitting there with no signal light flashing, apparently doing nothing.

(Magnifying matters is that I’m usually on my scooter, and in Seattle, it’s probably raining a bit.  And I can’t always lane split to get to the front and bypass the hold-up, especially if they are legitimately blocked [because then I feel like an impatient fool].)

Then, just as you’re reaching for your horn (or maybe after), they start to turn and suddenly now there’s their flasher.  What, did they hit it with their thumb by accident as they turned the wheel?

You can’t even go borderline racist and blame this on DWA, because lots and lots of cars/people do it in Seattle.  I wish I could go back in time and smack their Driver’s Ed teachers upside the head.

I suppose I should note two other things:
[Title reference: The song “Turn!  Turn!  Turn!” by The Byrds.]


I’ve finished incorporating the October, 2003–June, 2004 posts from my old “Bouncing Off the Walls” blog into this one, a whopping 64 items.  There were 202 items in the old blog, and I've now passed the halfway point in the merging process, moving in about 4 old posts per week.  (The Q3 2004 batch was the busiest, though, with 30 posts to merge in.)

In the process, I’ve re-edited all the entries, adding and correcting weblinks, clarifying text, and sometimes adding new comments.  Here are links to the 9 months covered, so you can read what I was up to back then:

A few of the adult (sex-related) posts are on my other blog, here:

What was going on in the world (and my blog) back this?  War in Iraq.  Janet Jackson’s nipple.  A bunch of “What Were They Thinking?” items.  And a little milestone in Massachusetts: same-sex marriage.

Between the two blogs, I’m now at 401 posts total.

Do Your Religion and Politics Extend to Your Pets?


Coming into work today, I was following a bus with an ad from the Humane Society (or maybe the SPCA) featuring a cat nursing a scad of kittens, labelled “Spay Me”, with a subtitle saying that family planning isn’t just for humans.

(It was totally LOLCat-able.  Photoshop the mama cat’s eyes a little bigger and add a word balloon saying “Please.  And soon.”)

It reminded me of a thought that came up a few weeks ago:


Do pro-lifers spay and neuter?

Spaying and neutering pets has long been a standard concept put forward by animal and pet groups.  I don’t think I have ever heard anyone take a stance against it, making it one of the (in theory) most non-controversial pieces of social messaging out there.

(I despise using the term “fixed”, though.  The pets are not broken.  You can argue that it is “fixed” as in “stabilized”, but few people think of that definition first.  It’s like using “catholic” when you mean “broad” or “universal”: everyone will have to work past the religious meaning to get at what you really mean, so why make them work that hard?  Unless you’re writing poetry, of course; you’re supposed to make people work hard to figure out what the fuck you really mean with poetry.  [Kidding.]  [No, I’m not.])

But with pro-life/anti-abortion people, though: for the extreme among them, any mention of “family planning” seems to inflame them.  And what is spaying/neutering, really, but abortion in advance?

I don’t know.  There is undoubtedly a theological difference between a fetus (post-conception) and an egg and sperm which don’t get together, but what about when it is the work of man keeping them from getting together?  The political philosophy is generally opposed to condoms and other birth control methods as well, under the belief that man blocking God’s will is wrong.  So following that logic, forced sterilization of a human — preventing the possibility of conception — should also be wrong.  (Presumably there are levels of wrong: abortion is worse than birth control, which I guess should be about parallel to sterilization, so long as you ignore the invasive/permanentness of it.)

(Hmm: is getting a vasectomy a sin?)

So back to the pets: if you’re opposed to birth control and to forced sterilization in humans, does that religio-political philosophy extend to your pets?  Should you be opposed to spay and neuter services because they are a form of birth control?  Or are they somehow okay because pets are dumb animals/lower lifeforms/unable to control themselves/creatures with no souls/whatever?

Talking about this with a co-worker, he did say he knew a pro-life couple who doesn’t spay/neuter their pets, so apparently some people follow this through at all levels, but they apparently keep pretty quiet about it.  (It’s hard to imagine people out picketing the Humane Society in opposition to spay/neuter services, isn’t it?)

Of course, we can flip this whole thing around from the right end of the spectrum to the left end: cats and dogs are carnivores, or carni-omnivores at best.  If you’ve decided to be vegetarian or vegan, do you require that of/force that on your pet as well?  (Myself, I can’t imagine a cat being happy with tofu and brown rice with a side of stewed lentils, instead of tuna.) 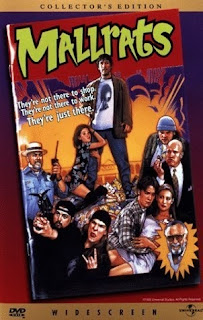 What Were They Thinking?
— I’m With the Band 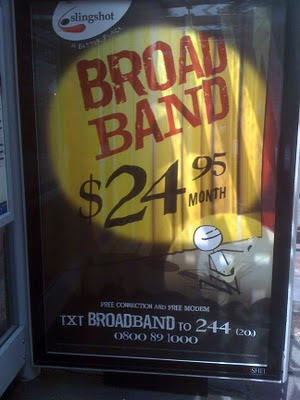 This ad was at a bus shelter in Taupo, New Zealand in February, 2010.

I guess they are trying to play on the second syllable of “broadband” with the stick figure playing guitar on stage, but wouldn’t it make more sense to indicate the value attached to the faster connection?

A broadband connection won’t really improve your playing, after all.  Not even in Rock Band or Guitar Hero.  Only practice can do that.