Last Wednesday morning, as I was getting to work, a guy got off the bus as I walked by and loudly proclaimed:


“I love having sex with older women!”

Mind you, the Sweet Adelines International competition was happening late last week at the Seattle Convention Center, just a couple blocks away.  There were more women than usual around that day, shopping an sightseeing, many in their 50s and 60s.

I doubt it got him any, but hey.  More power to you, guy.

What Were They Thinking?
— The Challenge is Figuring Out the Challenge 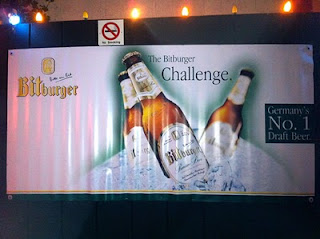 This banner showed up at the Cuff Complex recently, advertising the German beer Bitburger now being stocked by the bar.  I’ve tried it, and it’s okay, but I'll stick with (darker) local favorites like Mac & Jack’s and Manny’s and Red Hook.

The banner advertises the “Bitburger Challenge”.  Which is… what?  Based on the banner, it would appear to be drinking Bitburger.  Maybe the challenge is drinking it on ice, or drinking three bottles of it?  Gee, makes it sound foul.  (Is it like Jägermeister, a liquor apparently so nasty tasting that they used to advertise it with guys making horrible faces from drinking it?)

A web search doesn’t reveal anything about the “challenge”, either.  The challenge of being a top three brand in Germany.  A Facebook page with two posts on it and no descriptive content.  A no-name web forum which has a link to a video of a guy being urged to drink a huge stein of beer.

A more refined search finally showed this page, which refers to people trying to drink an entire mini-keg (looks like it holds about a gallon).  Is that it?

What Were They Thinking?
— The Sound of Silence 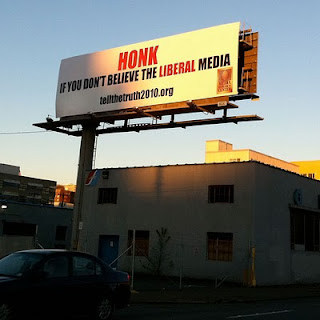 This billboard looms over Denny Way at the foot of Capitol Hill — presumably just about the most liberal part of the city — asking people to honk if they disagree with the (so-called) liberal media.  If you must learn more about their cause, go to tellthetruth2010.org.

It’s amazingly quiet there at 6:00 pm, with a multi-block line of cars waiting to get on the freeway.  Quiet enough that you wonder if they wasted their dollars.

(Hmm, maybe the billboard’s presence has an unintended side-effect, convincing irate drivers to not user their horns, lest others think they are reacting to the billboard.)

Email ThisBlogThis!Share to TwitterShare to FacebookShare to Pinterest
Labels: media, politics, What were they thinking

Sweet Isadora Duncan
Talented, cute little punkin’
A wheel caught her scarf
Tore her head quite in half
They knew ’cause they heard the ker-plunkin’

This morning, I was riding the scooter to work and realized that the high temps coming up are all in the 50s — we’re past the last days this year we can even pretend it is warm, although neither is it outright cold, just verging into that ugly cool damp zone — so it’s time to dig out a scarf.  Another few weeks and I’ll be layering a sweater under the jacket every day, and putting the extra lining into my blue motorcycle jacket.  Sigh.

Email ThisBlogThis!Share to TwitterShare to FacebookShare to Pinterest
Labels: poetry

What Were They Thinking?
— Get Your Sunglasses Before the Summer Rush

A whole series of these ads for Sunglass Hut have just invaded the Seattle bus/transit tunnel that runs under downtown (including under Macy’s).

Maybe it’s just me, but I don’t see late October, when it starts getting dark in the late afternoon and just before the rainy season sits down for a five-month squat, as being the ideal time to push sunglasses in Seattle. 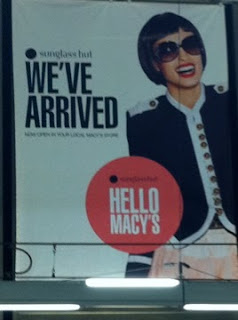 Email ThisBlogThis!Share to TwitterShare to FacebookShare to Pinterest
Labels: weather, What were they thinking 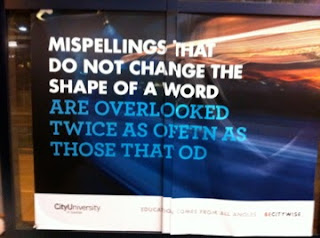 I honestly can’t tell what these ads for City University are trying to get across?  Remedial spelling classes seem a bit below what you expect from adult education programs at a “university”.

The flip side of that, however, is that they are pushing graphic design skills with the idea that using all uppercase text turns words into rectangular blocks, making them harder to differentiate based on shape (and thus uppercase text is harder to proofread).  But that doesn’t seem like an easy message to get across in ads, nor does it seem to actually be the point of these ads.

So maybe they are doing an ironic push for Marketing classes: attend City University and you’ll be able to make ads that do a better job of getting your message across than these do.

For a while now, I’ve wanted to highlight some of the blogs and websites and webcomics that I read, both to examine for myself what I get out of them and maybe turn a few other people on to them.

This week is the 10th Anniversary of Andrew Sullivan’s blog, “The Daily Dish”.  You can read his biography here, but in summary, Sullivan is a well know gay conservative writer, notable in his writing for several books looking at homosexuality from a positive-but-conservative viewpoint, especially Same-Sex Marriage: Pro and Con.  On the blogging front, he started out quite pro-Bush and has drifted more moderate over the years as revelation after revelation about the directions of the the Republican party have come out.  (Or perhaps he didn’t drift, everything else did in the opposite direction.)  And don’t get him started about Sarah Palin.

Years ago, my father taught me that the best way to beat something was to understand it, and the best way to understand it was to pay attention to it.  As an example, he was on the board of Planned Parenthood and he was a member of the Christian Coalition (I imagine they were really pleased that he was a minister); as such, he got access to huge doses of everything the theocratic right was up to, practically by the shovelful.

I’ve put that policy into effect in my own life over the years, listening to Dr. Laura and Michael Savage and Michael Medved and Rush Limbaugh and Mark Levin on the radio — often shaking my head at stuff I couldn’t quite believe I was hearing.  It’s been especially interesting to listen to conservative talk radio in Seattle over the years as they’ve moved through these people one at a time, eventually kicking each to the curb and moving on to the next voice.  And where convenient, I at least open my ears to other sources of information and opinion, just to see what’s up on the other side of the fence, to see what the “easy” channels of information are not telling me.

(Really, it sometimes surprises me how much people — especially ostensibly liberal queers and techies — like to live in their own little bubbles.  They say they want to be up on politics and current events, but no, really they don’t.  Just like people addicted to Fox News, they want to get their news only from narrow, supportive avenues, ones which will feed them more of what they want to hear and nothing to challenge their world views.  If you try to balance their viewpoints, they will often fight to death to keep from learning stuff which will imbalance them.)

I initially started reading Sullivan’s blog (back in about 2002, I think) for much the same reason — to see what these “gay conservatives” were up to.  Initially, as a good fag living in a very blue city (Seattle), I was repelled by much of the pro-Bush content and such, but I muscled through.  (And “muscled through” is right: The Daily Dish has many screenfuls of content on its front page, and sometimes will fill more than one front page in a day [although less so today than in years past], so it takes a dedicated block of time to consume it.  Sullivan [and his assitants/substitutes] isn’t quick reading.)

Over time, well, the abyss gazes back: even as Sullivan’s tune shifted some, so did mine toward him and his blog.  Being confronted by opinions on the other side of the fence — opinions which are generally well written and well rounded, as opposed to the shrill name calling from talk radio — expanded my views.  Not necessarily changed my views; expanded them.  (It’s interesting to go back and revisit my blog posts from 6 and 7 years ago.  Can I see some influence from Sullivan in there?  Maybe.)  I agree with some things I read, and disagree with others, but most of all, I can’t help but respect Sullivan.

And that’s probably really all he asks for.

Email ThisBlogThis!Share to TwitterShare to FacebookShare to Pinterest
Labels: internet, Stuff I read 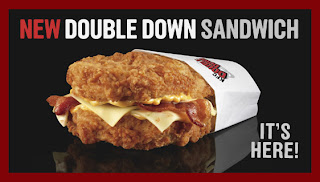 You remember the Double Down: the carb-free super-protein all-meat sandwich from KFC, bacon and cheese between two slabs of chicken, no bun.  (Okay, you’d need the grilled version rather than the breaded one to get close to carb-free.)  Lots of news coverage and controversy when it came out, including use of the phrase “suicide cuisine”.

But have you actually eaten one?  I have.  Visited a KFC in Centralia on a trip to Portland in July.  Sought it out specifically instead of other less-than-fine dining options.

The first bite was far more peppery than I expected, from the spices in the breading.

By the time I was 2/3 done with the sandwich, though, I was over it.  Too much meat, or at least too much intensity of the meat.  I’ve found this before with other bigger-size fast food; when I got to the last couple bites of that Wendy’s Double, I was no longer thrilled with the sandwich and I more “finished” it than “ate” it.  (This probably means that I’m safe from overdoing it on fast food.)