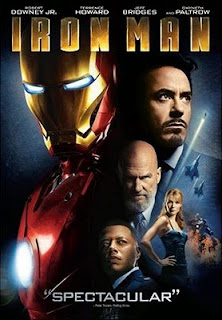 What Were They Thinking?
— A comma, a comma, my kingdom for a comma! 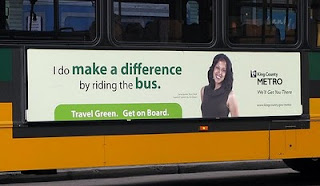 There is a new “ride the bus” ad on Seattle city (and King County) buses, with alleged bus riders saying “I do make a difference by riding the bus.”  But it raises a question to me:


Who the heck was the copy writer on this?

There are four ways you could use this basic sentence:


I make a difference by riding the bus.

This is the answer you would give to the question “How can you have an effect and promote a green lifestyle?”  The response is simple and factual.  Riding the bus is the important thing here.


I make a difference, by riding the bus.

This is the answer you would give to the question “Can you have an effect and promote a green lifestyle?”  Yes, you can (hello Obama), and here’s how I do it.  It’s a little more forward.  It stresses that you can make a difference, with riding the bus being one person’s answer.


I do make a difference, by riding the bus.

Here, the response would be to a question like “Can someone really have an effect and promote a green lifestyle?”  There’s a bit of disbelief in that, requiring the refutation word “do”, and then the clarification of how the person makes a difference.


I do make a difference by riding the bus.

But this is the version actually being used.  This is the response to “I don’t think one person riding the bus can really have an effect and promote a green life.  Prove it.”  The response is refutational, and petulant, and ultimately inadequate.  There needs to be a little foot stomp and the follow-up line “I do, I do, I do, I do, I do!”  (And I don’t mean to reference an ABBA song here.)

In other words, they opted for the worst of the four options, the one that carries the least weight and the most whining.


But you know, maybe there are other potential values to the wording.  Maybe if we look at the meter of the line?


i DO make a DIFerence by RIding the BUS.


I make a DIFerence by RIDing the BUS.

The meter here ends up falling on the first syllable instead of the second, but then swoops into the same meter for the rest of the phrase.  That’s not a bad thing, since it then stresses personal responsibility, but it results in no reason to include “do”.

(Note as well that the ad chose to emphasize “make a difference” and “bus”.  While that's arguably a design choice, it runs counter to using the meter to influence the meaning by forcing emphasis that goes in a different direction.)


So meter is out as a reason to use this wording.  Anything else?

Could this be a subliminal gay marriage thing, maybe?  By putting those words — which hold a lot of symbolic power in our culture — in front of thousands of people every day, are we keeping the concept of marriage in the front of everyone’s subconscious?  And since marriage really only gets coverage in light of same-sex civil marriage these days, is reminding people that it exists a subtle way of pushing for tolerance?

Or am I a conspiracy theorist today?  <grin>

[Thanks to the Seattle Transit Blog for the image.]

[Thanks to William Shakespeare for the entry title reference.]

Email ThisBlogThis!Share to TwitterShare to FacebookShare to Pinterest
Labels: language, rant, What were they thinking 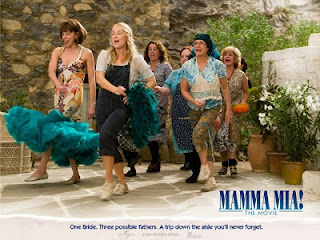 Please don’t make Pierce Brosnan sing in a movie ever again.  Ever.

Note: I have not seen the stage version of this, so I can’t comment on how well or poorly the screenplay meshes with the original.  But I have my suspicions that a few things got dropped in the movie.

Beyond that, make no mistake, Mamma Mia! is not a “serious” movie.  It is camp.  And when it remembers that it’s okay to be campy, that’s where the film excels and sells itself to the audience, making us smile, giggle and twitter, and even sing along.  (It’s ABBA music.  You’re supposed to sing along!)

When the movie pushes in a bit of melodrama — Sophie and Sky’s tiny spat, for example — it stutters and stumbles.  (Or anytime Brosnan sings.)  But as soon as the next whoop-it-up chorus-boys-and-girls dance number comes along, all is good again.

The casting, or more the use of the cast, is spotty.  The two adult women sidekicks rip into the film with abandon, chewing the scenery and carrying the film forward.  Meryl Streep always feels reined in by uncertainty — should she just say “fuck it” and embrace the cheese, or should she hold back?  This is informed by the character she is playing, perhaps, but she never feels like she is inhabiting a movie built around ABBA songs.  The girl playing Sophie is a wide-eyed cipher; her motives and dreams are vaguely mentioned throughout the movie, but she never really projects them.  Sky is cute but otherwise empty.  All three adult male cast members seem more stunned by the film than anything else; again, while that’s part of the characters, it comes across to the viewer as mediocre acting (or poor directing).

Thank goodness for one of the men’s implied gay romance.  The confession exchange on the boat gave more depth to the two characters talking than the entire rest of the film had, and included a genuinely clever crossed-signals dialogue bit.

Also annoying was the insistence on groups of three — three adult women, three adult men, Sophie and her two girlfriends.  Sophie’s gal pals are so prominent in the first 10 minutes that their near absence from the rest of the film stands out strongly.  And should there have been a threesome (ahem) with Sky as the pivot point, to keep that balance?  Oh yes, we did see Sky, the black bartender, and one other guy together for about 3 seconds in one scene, so maybe there was such a triad intended.  (Typical story logic says that the unnamed third guy there should also be the gay fling attached to one of the adult men, but I don’t think it was the same actor.)

In the end, you have two choices with this film: sit outside it and analyze it and find it wanting, or inhabit the film’s world and burst out into song, dance, and sequins as needed.  The choice is easy; the hard part is dealing with Pierce Brosnan’s singing voice.