This was the view last week in the parking garage I use for work.  Four blue scooters and motorcycles in a row, ordered in color from lightest to darkest.  Mine is the third one from the front.

(Actually, there was a fifth which is out of frame at the front.  An orange scooter kind of blows the image.) 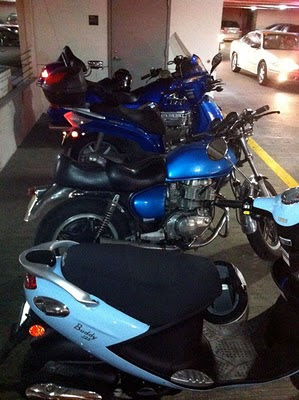 Email ThisBlogThis!Share to TwitterShare to FacebookShare to Pinterest
Labels: scooter 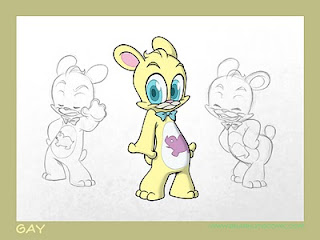 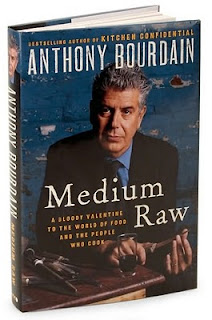 I finally finished Anthony Bourdain’s latest collection of essays (I bought it this summer and read it in chunks, a perfectly suitable thing to do with a book of essays), Medium Raw: A Bloody Valentine to the World of Food and the People Who Cook, but I cannot recommend it… to anyone who has not read his other books.

I don’t know how/where I first encountered Kitchen Confidential: Adventures in the Culinary Underbelly.  Saw it recommend by someone I respect on some website, probably.  But I bought it and thoroughly enjoyed the stories of his early career, his up and downs, and his personality conflicts.  In Kitchen Confidential, Borurdain painted a vivid picture of a career path which I was interested in but had no interest in getting into.

When his biography of Typhoid Mary: An Urban Historical came out, I snapped it up and devoured it quickly.  A lot of people who know Bourdain’s work don’t even seem to know it exists, which is a shame.  It’s a great look into households and cooking practices from a century ago which should make people today absolutely twitch, wondering how we survived.  (On the flip side, a lot of people claim that the modern rise in allergies is a result of “too much” cleanliness and such in our food preparation, that we are bringing it on ourselves by not being exposed to things which would help build immunities.  “A little dirt never hurt anyone.”)

His third book (might be his second; Wikipedia lists it before Typhoid Mary), A Cook’s Tour: In Search of the Perfect Meal, was fascinating, combining a travelogue with an examination of exotic meals and delicacies.  (“Delicacy”: a word that means weird-ass food that not even the locals eat/enjoy very much.)  His focus on stuff like Vietnamese phở and a Portuguese farm using the entire slaughtered pig were fascinating and really encouraged me to try stuff previously outside my comfort zone, such as tendon and the like in my phở .  (But I’ll still say no to cobra heart, thanks.)

(As an aside, I do the bulk of my pleasure reading in one of three places/times: with a meal, including dining out by myself; in bed just before going to sleep; and on a plane.  Do not — I repeat, do not — read Bourdain’s essays about food in Kitchen Confidential or especially in A Cook’s Tour while you are eating a meal.  I don’t care what you are eating, the stuff he is describing will either sound so fantastic that what you are eating will become depressingly plain, or else it will sound so gross that you’ll lose your appetite.)

Which finally brings us to Medium Raw, and why I can’t recommend it as a first taste of Bourdain.

The essays in this book are mostly focused on three things:
In other words, if you don’t know (aren’t able to recognize) the chefs and restaurants that Bourdain name drops — or at the least, if you aren’t apt to travel to New York or Europe and patronize high-end dining establishments — and if you haven’t read his earlier works (and probably haven’t read them recently, to boot), this isn’t a book for you.  Do not choose this as your entry to Bourdain; you might as well start reading Harry Potter midway through book #7 and hope to follow things.

Myself, I don’t know these names or these restaurants, and I’m not going to travel to where they are or frequent them if I should, and it’s been probably 8 years since I read Kitchen Confidential.  Having read others of his book, I knew what I was getting with Bourdain: as mentioned before, I’m getting a view into a career and a lifestyle which I am interested in but which I have no interest in getting into.  There are probably relatively few career/lifestyles where, as Bourdain describes it, people from all walks of life, given the right choices and breaks, could genuinely ascend to a high level of skill, fame, and renown; that concept makes this book, if not fascinating, at least intriguing, and forgives the relative impenetrability of this piece.

Do pick up one of Bourdain’s books.  Just not this one, not as your first taste of him.

(Perusing his Wikipedia entry, I see there are two other essay collections I've missed: The Nasty Bits: Collected Varietal Cuts, Usable Trim, Scraps, and Bones [2006] and No Reservations: Around the World on an Empty Stomach [2007].  Must get.)