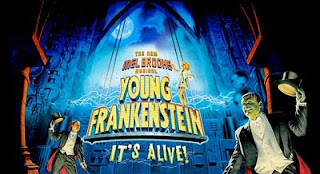 The new Mel Brooks’ musical, Young Frankenstein, is in the middle of its world premiere engagement here in Seattle, prior to it heading to Broadway.  This is the fourth big musical to have such a premiere here in recent years: Hairspray, The Light in the Piazza, and The Wedding Singer preceded it.  We saw it this afternoon.

The biggest problem with this show is the most obvious, but also the one no one really puts their finger on in the reviews: it’s not in black and white!  (You have to have seen the film to understand what I mean, I’m sure.)

More seriously, they did a great job with the show.  Perfectly dandy casting — especially for Christopher Fitzgerald as Igor (channeling Marty Feldman), and Megan Mullally’s Elizabeth has a love of the late Madeleine Khan in her.  (It’s a deep love.  You have to see the show to get that joke.)  Roger Bart isn’t Gene Wilder, but he was quite fine as a loopy brain doctor (having previously been most familiar to me from Desperate Housewives, playing a loopy pharmacist; typecasting?).

Few of the songs are especially memorable, but that really means only that they are there to feed the jokes and to advance the story.

The show is definitely still new.  There were a few flubbed lines in today’s performance — most notable Inga saying “Put the candle in!” (huh?).  And a couple schticks just don’t have the timing down yet: the “Where wolf?” bit thudded, and the “hump” jokes didn’t come off as well as they should have.  I’m sure those will be patched up before it gets to Broadway.

Of course, this brings up the really big matter: when you’re doing a musical version of a beloved film, how can you preserve everything that’s important to people who can quote the film back to front?  (Mind you, Young Frankenstein is probably my fourth most watched film, after The Rocky Horror Picture Show [which had a musical on Broadway recently], Monty Python and the Holy Grail [which had a musical on Broadway recently], and Star Trek II: The Wrath of Khan [God help us if it ever has a musical on Broadway].)  It’s a tight line to walk, getting in all the quotable bits and adding 10-20 songs. Sometimes they manage it, and sometimes they don’t.  (Spamalot didn’t, in my opinion, and came off the worse for lifting a song from Life of Brian and not having any crucifixions to go with it.)

Fortunately, Young Frankenstein succeeds admirably.  Right now in the other room, Josh is watching the movie and I’m listening to bits, and being pleasantly surprised by some bits that I forgot about that did make it into the show after all.  (The two significant bits lost that I’ve noted — and there are surely more — are “You take the blond, I’ll take the one in the turban” and the game of darts.  Oh, and “Damn your eyes / Too late”, but without Marty Feldman and close-up camera work, that one’s quite forgivable.  I didn’t miss people not understanding what Kemp says, either.  And indeed, even the lost bits are adequately covered with new content which precludes the original pieces.)

Of note as well is that Brooks didn’t just add a bunch of songs, he added some new running jokes, fleshed out some back story, and did a decent job of avoiding things feeling like it was just songs pasted onto a movie script.  (And let’s not forget Susan Stroman’s choreography.  There some really great hoofing in the show, and that includes the horses pulling the [roll in the] hay cart.)

The show only runs in Seattle through next weekend, so you’ll probably have to wait for it to go up in New York.  Until then, take your sedagives and wait.