The pavement, streaked
Blood red and brown
Shards and moist bits scattered about

Cars drive through
Unseen, uncaring
Grinding to a paste
Smearing across the roadway

Some leaves have yet to fall


[“Motorcycle poetry”: imagery that comes to me and percolates into poetry while I am riding.] 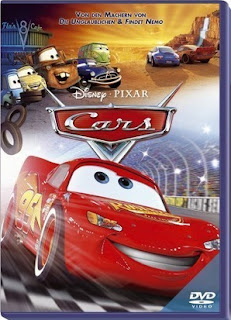 For starters, I don’t like NASCAR (or other car racing).  And mind you, this isn’t in isolation: I went with a date to a car race one time; I don’t think we went out again after that.  90-minute drive to get there, and another hour to get into the racegrounds and park (and an hour to get out again later).  Then lots of cars going by a few at a time, and expensive concessions.  What was the point?  Not even any crashes.

(There’s a theory that says there are two types of sports.  In one, you go to see someone doing something impressive — track & field, for example.  In the other, you go to see someone get hurt — football.  Car racing: in person, you often can’t see the whole picture of the race, just a couple hundred yards of the track, so frankly, you’re there in hopes of seeing a nasty crash.)

(Baseball doesn’t seem to fit into either category.  Maybe it’s not really a sport?  And Ice Dancing falls in both categories.  <grin>)

Beyond that, with Cars in particular, I found the character designs to be ugly.  And while I expect a simplified story in animated films, since they are largely aimed at kids, I typically expect enough non-kid content in a Pixar film to make adults not feel the film was a waste of their time.  I didn’t get that in Cars: shallow characterization, predictable plot, and a “message” throughline so worn that it could get a blowout on any curve.

Beautiful work on the landscapes.  Can I get a short film just of them? 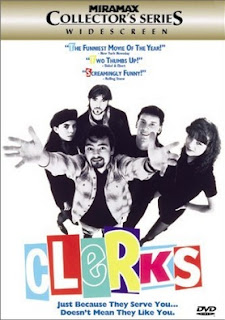 After disliking Mallrats so much, what did I expect, watching an even earlier Kevin Smith film?  Glutton for punishment, I guess.

Neither Dante nor Randal present as well-formed characters.  Randal’s dialogue, in particular, never comes across as realistic; not just being delivered like a swiftly memorized, passionless monologue but apparently written in the same way.

I still have Chasing Amy and Dogma in my Netflix queue.  They are newer films, so Smith’s skills should be better, right?  They can't get worse, can they?  Can they?

I watched this in 5-10 minute chunks over the course of a month.  (That it took me a month to finish it says something.)  I have no problem doing that with most any movie; I have read comic books for thirty years, and they present a 22-page chunk of story once a month, unfolding over 4, 6, 12 months, so doing a movie that way over days or weeks is not much different.  Clerks itself is very “chunked”, even with segment titles throughout, so it works even that much better viewed in pieces than most films will.