Crossing the Burnside Bridge, from a guy in a a t-shirt that read "HOMO" with a red circle/slash on it:


“It’s such a devastating lifestyle.  It makes people cry.  It brings shame.”

(That’s what you’re claiming these days that is wrong with being gay?  It makes you cry?  And you’re saying this on Pride day?  What planet do you live on?)


Here is the final review of the movies and books I dealt with on my trip to New Zealand this February. 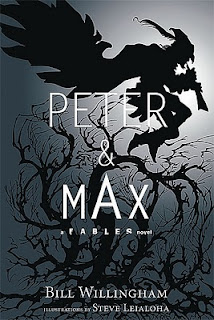 First, some background on the comic book Fables:


Imagine a world where all the stories and characters we think of as “fairy tales” — Snow White, Little Red Riding Hood, Aladdin — existed, each in their own universe/dimension/whatever.  In this universe of fairy tale worlds, there are linkages between the worlds, and as is inevitable, someone from one world built an army and attacked another world, and another one after that, and another one, creating a vast empire.  In the wake of this empire building, many characters we know from stories (dubbed “Fables”) fled from their homeworlds to our mudane, largely magic-free world (and many others died along the way).  Here, those characters and their stories live on, nearly immortal, and a few hundred years later, there are a couple enclaves of Fables and a scattering of individuals around the world.  Leadership of the Fables has fallen to the likes of Snow White, Prince Charming, Old King Cole, Bigby Wolf (formerly known as the Big Bad Wolf, now reformed), and Beauty and the Beast.

Fables is a comic book series written by Bill Willingham, running now for almost 100 issues, about 8 years, with a host of collected volumes, spin-off series, and a TV show in the works, plus now the prose novel, Peter & Max.

Now for the novel itself.

One of the conceits of Fables — and any fiction that pulls together threads from many other sources — is that any characters which could be connected or related, are.  And thus since fairy tales contain two “piper” characters — Peter Piper, who picked a peck of pickled peppers, and the Pier Piper of Hamelin — those characters must either be the same or related.  In this case, brothers.  (The conceit also draws together noted Peters: Peter Piper is also Peter Peter Pumpkin Eater and might be the one from “Peter and the Wolf”.)

Peter & Max follows two storylines.  The first is long ago in the Homelands, with the boyhood of brothers Peter and Max Piper, the conquering of that world, the bestowal of magic flutes and their associated curses, and Max’s turn away from being a good boy.  (You’ll recall the story of the Pied Piper: he cleared the town of rats, but when the city wouldn’t pay, he led the children away as well, never to be seen again.)  Along the way, we encounter other characters familiar to Fables readers and fairy tale/nursery rhyme fans: the Big Bad Wolf, the Black Forest Witch (of gingerbread house infamy), and Little Bo Peep.  The second storyline involves the return of Max to the modern world, and Peter’s journey to meet him and hopefully stop him from killing all the other Fables and generally wreaking havoc on the world.

Half of the fun in a book like this is seeing the author pull together the threads of familiar stories, especially ones that were less obvious, and adding new stuff into the mix to create something both familiar and new at the same time.  Willingham has been doing this with Fables for years (and projects like Pantheon and Coventry/Ironwood before that), so there’s no question he knows how to do this task successfully.  The real question, then, is how accessible is this to people who have no connection to the Fables comics, and that I can’t answer since I’m way to close to the comics (having read them all as singles and again as collections).  But I can answer two reverse-side questions: this novel is largely independent from the comics storylines, so there’s little in the way of “I know this must refer to something, but what?” moments (so this isn’t a “crossover” where you have to buy all the pieces to figure out the story), and for readers of the comics, there are some new insights into the secondary characters here who are primaries in the comics (so comics readers benefit from reading the novel).

Definitely recommended for fans of the comics.  For fans of this sort of story, moderately recommended: others like Neil Gaiman have done it better, but this is just fine and serves as a gateway into some truly excellent comics, a much broader world than seen in just the book.

I would be happy to get another Fables novel like this every couple years.


“There can be no greater reward in life than to come back as a gay man’s pet.”


I dreamed that I was riding on my scooter, just about to get onto I-5 southbound at the MLK ramp, going somewhere south (although not as far as Portland, 170 miles), when something went wrong.  Snapped, broke, slipped, I don’t know.  But my motor revs went way down and I suddenly couldn’t sustain speeds over about 20 mph.  I limped home and had to give up on wherever I was going.

This was one of those “too close to home” dreams, since I rode past that exit on I-5 yesterday, going down to a site visit at an airport hotel (as a potential site for an upcoming event).  Also, last Friday, I took my scooter in for a checkup and was told that I need a new air filter, a new belt, new rollers, and a new back tire.  And thus I shouldn’t ride it long distances, which means I won’t be taking it on the trip to Portland this coming Saturday.  So I guess that stuff is weighing on my mind.

What Were They Thinking?
— Mirror, Mirror, On the Bumper

On the way to work a couple weeks ago, I was following this Cadillac Escalade SUV. 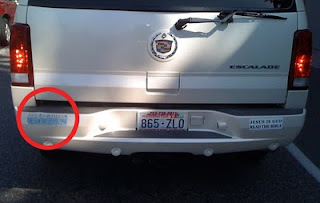 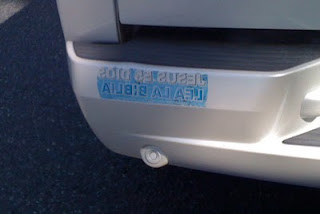 So now the question becomes “Who the heck puts a reverse image bumper sticker on the back bumper of a car?”

(Hint: Reverse image items are intended to be read in a mirror.  No one is going to see your back bumper in their mirror.  These are intended either for your front bumper — which is also a stupid place for them, since if someone is trying to read your bumper sticker while looking in that mirror, they are going to get in an accident [plus the front bumper isn’'t usually visible in a rear-view mirror anyway] — or the thing is supposed to go inside your back window or on your bedroom wall opposite your dresser, where you will see the devotional reminder in your own mirror and… well, I don’t know what you do then.  Feel good?  Read the Bible?  Watch Glee?)

Email ThisBlogThis!Share to TwitterShare to FacebookShare to Pinterest
Labels: car, What were they thinking 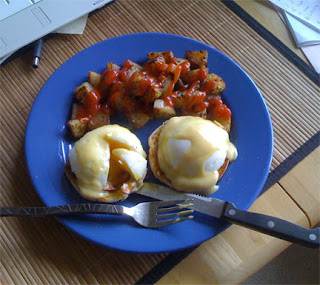 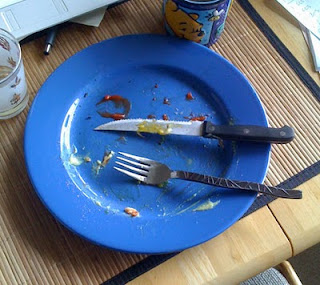 And it turned out to be awfully easy.  I’ve tried a few egg-poaching gadgets over the years, but none have worked very well.  (Anyone ever try one of those microwave egg poachers?  What an explosive disaster that was!)  But I picked up a pair of poachpods a couple weeks ago and presto, they just work.  I can now make my own Eggs Benedict whenever I want.  (Okay, I’m using Hollandaise from a mix at this point.  I’ll tackle that for real someday soon.)

Which means now I get to experiment.  I’ve already done them with pepper bacon rather than Canadian bacon, but how about replacing the English muffins with artichoke bottoms like California Kitchen in San Mateo used to do, or pepper grits like Cape Fear Café in Duncan Mills did?  (Alas, the first of those is long gone, and Bennies are no longer on the menu of the second.)  How about spicing the inside of the poachpod, maybe with some chili sauce?  Mmm.

Email ThisBlogThis!Share to TwitterShare to FacebookShare to Pinterest
Labels: food 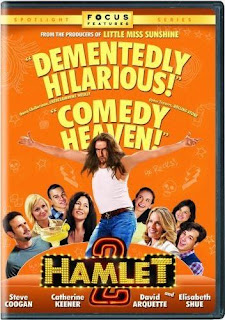 I recently tripped across the big song from Hamlet 2 recently (working on this post), so I added it to my Netflix queue.

The movie is about a lousy high school drama teacher who is told that the drama department is being cut, so he decides to go out with a bang, producing a whacked-out controversial musical sequel to Shakespeare’s “Hamlet”, which results in rejection and near rioting.

In the post-Glee world, it is probably impossible to avoid comparisons between the TV show and this film.  So why fight it: Hamlet 2 is at least a thematic predecessor of Glee, if not an outright inspiration.  Recommended viewing for fans of Glee.

What I found most interesting about the film, though, was how my view of it changed slightly after watching the DVD extras.  On first glance, the movie appears to be in the “inspirational teacher” genre (Mr. Holland’s Opus, Dead Poet’s Society, etc.), but the filmmakers say that they hate those films; Hamlet 2 is really an “anti-inspirational teacher" film.

And when you think about it, that’s true.  Foremost, of course, is that the teacher is totally incompetent; although he has a lot of heart and passion, he has no idea what he is doing, and any success comes despite him rather than because of him.  Beyond that, most of the tropes of the “inspirational teacher” genre are all but missing: we never see the kids practice; we never see the kids fail and then improve; we never see the show going up against deadlines or almost failing to come off; they play with the teacher inspiring the low-life ethnic kid, but he turns out to the school’s best student; etc.  As you watch the film, you don’t quite realize that they are doing a drive-by on these tropes, flipping the bird as they go by rather than stopping to pick the trope up.  Kind of cool, in retrospect.

The other note of interest I found in the DVD extras is that the movie was filmed in Albuquerque rather than its setting of Tucson.  (Tucson told them no, based on how much they badmouth the city.  Go figure!)  And thus the “Tucson Gay Men’s Chorus” used in the film is apparently actually a gay men’s chorus from Albuquerque.  But I had that figured out (well, strongly suspected it) ahead of time, because I recognized one of the singers, a square dance caller I know from Albuquerque.  (Nice shirt, Bill.)  (Private joke.)  Alas, the singers are not credited in the film or on IMDB, neither as a group nor individually; Bill confirmed it for me via Facebook.