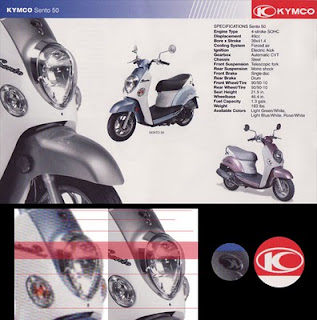 This is a page from the latest Kymco Scooters promotional booklet, about the Sento scooter.  Each page of the booklet has a large cropped image of the scooter on the outside edge of the page — left, in this case — plus a couple smaller colors shots and specs for the vehicle.

Unfortunately, the Sento only has its name on the front left side of the scooter (as you can see from the two- full-scooter images), while this page ended up as a left page, so the front right side would be shown in the large cropped image (and thus would not have the logo on it).

So to fix that, they took the front left side and flipped the image horizontally.  This seems a perfectly reasonable thing to try, except that it reverses all logos, including the main Kymco logo — see the inset on the right — and it would reverse the Sento logo as well.  So what did they do?  They apparently digitally removed (Photoshopped out) the Sento logo, and then pasted in a new, non-reversed copy.  Except, as seen on the inset on the left, they didn’t get it at quite the right place — it’s too high, not angled right, and of course, the “S” should be closest to the headlight (hard to help that, though).   All in all, a pretty lousy job, probably a rush.

The right answer, of course, would have been to move the Sento to a right hand page in the booklet, so they could have used a correct, unaltered image.  Second best would have been to use a non-flipped image of the side without the Sento logo — so the Kymco logo wouldn’t be flipped and they wouldn’t have to remove the flipped Sento logo — and then just paste in the isolated Sento logo (at the right place and angle, of course).


I caught this 1989 video from the Belle Stars over the weekend at a bar in Los Angeles:

Check things out between 1:50 and 2:00.  Silhouetted guy dancing wildly in front of neon color backgrounds?  Hmmm, where have we seen that in recent years?


Original video was gone from YouTube, had to find a new copy.

Appropriate day for an update to this, given that the iPad was announced this morning.

What Were They Thinking?
— Meds for Cross-eyed and Possessed Pets 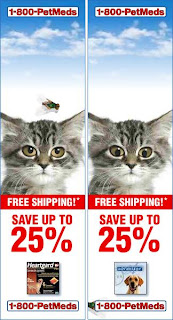 You probably saw these website ads for 1-800-PetMeds early this year: when the mouse passes over the ad, it turns into a bone or a fly, and the dog or cat’s eyes follow it.  Cute, huh?

At least until you move the cursor to extreme points — such as between the pet’s eyes — and the eye-tracking algorithm breaks, turning the pet into some hideous monstrosity, either a cross-eyed cat that probably can’t aim to find its litter box, or a possessed pug (ugly enough to start with).

(Maybe the dog is having visions of the future and is about to paint?  Or spray?  Or spray paint?   Where’s Mr. Muggles when we need him?)

Seriously, test your Flash ads before you deploy them.

Email ThisBlogThis!Share to TwitterShare to FacebookShare to Pinterest
Labels: internet, pets, What were they thinking

Be careful out there…


Be careful out there, folks.
…In the rain.
…On slick streets.
…On hills and curves.
…Passing cars.
…With other cars changing lanes.
…At dusk.
…And all of these together.

Or you might end up on Columbian Way, passing a car to change lanes in front of it, and have another car zip off I-5 onto Columbian and cut right in front of you to change across two lanes.

Down goes the scooter, skidding on its side up the hill.  (Here’s a map.  It happened right about at the top of the curve.  Thursday, October 9, at about 6:15 pm.)

Down goes the rider, body surfing on the wet asphalt.  Face down, feet first, uphill.  Looking at the wheels of the car he just passed coming closer as the driver slams on his brakes.  And the other driver just zips on up the hill and around the curve, probably not even realizing anything happened.

Thank god for leather jackets and helmets, and for drivers who are on their toes and able to stop.

Clothing DamageScooter DamageExcept for the throttle issue, seems to be cosmetic damage and drivable.

Nobody tell my mother, okay?


I didn’t note it at the time, but I was on my way home (a) to meet the guy doing some landscaping work for me to consult about my back stairs, and (b) to have a first dinner date with the guy who has now become my boyfriend in the intervening year-and-some.