What Were They Thinking?
— “Things fall apart; the centre cannot hold” 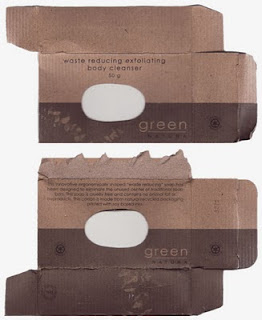 On my last trip to Washington DC, the hotel I stayed featured this “Green Natura” product, which referred to itself as “Waste Reducing Exfoliating Body Cleanser” — which is to say, soap with some gritty stuff in it.  Nothing special there.

What was interesting, though, was the text on the back of the box:

This innovative ergonomically shaped “waste reducing” soap has been designed to eliminate the unused center of traditional soap bars.  This soap is cruelty free and contains no animal fat or byproducts.  This carton is made from natural recycled packaging printed with soy based inks.

Yes, that’s exactly what it sounds like: a bar of soap with the center removed!

The theory is that as we use the bar of soap, the size dwindles until we get to an small hard-to-use center, which we throw away.  (Well, some people do that.  I usually use the soap all the way down to the chips.) 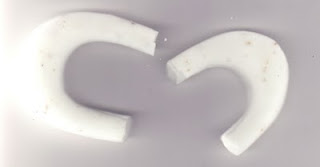 In practical terms, though, what you get with Green Natura is this second image.  You start with a thin ring of soap and you use it for a couple days, and then the (inherently fragile) ring breaks, leaving you with two or more pieces shaped very inconvenient for use.  Which you… throw away.

In other words, by removing the 25% of the soap that many people throw away after a couple weeks of use (but which makes the bar able to be used in the first place), this “waste reducing soap” encourages you to throw away as much as 75% of the soap they do give you after just a couple days!

Taking this one level further, though, want to bet that in removing that center 25% of the soap, they don’t remove 25% of the cost, and actually charge you more for the privilege of wasting more?  Looks like you buy this as National Park gift shops at $5 for a 5-pack, but I cannot find it for sale in other places, including on Amazon.  It’s hard to evaluate the relative costs as a result.

So far as I’ve been able to find, there is no website for the company and its soaps.

(Now, I’ll grant that hotels have a special problem here, where guests often only use a bar of soap once, especially if they are only staying one night, which does result in significant waste.  Those little butter pats like Cashmere Bouquet aren’t suitable for an upscale property, so I can see that there would be an attraction to something like this which has inherently less waste.  But for the guest who is at all conscious of what he or she is using, it still ends up looking royally stupid.)

Email ThisBlogThis!Share to TwitterShare to FacebookShare to Pinterest
Labels: user experience, What were they thinking