Around five years ago, as I approached 40, I started having an increased problem with falling asleep.  Not quite insomnia, I think, but I would sometimes lie there on the edge of sleep for quite a while (often 20–30 minutes, occasionally an hour or more, and a few times, genuine “I’m not going to sleep, am I?” insomnia).

I assume that this was primarily biological, part of the aging process, but I was having some issues with my relationship at the time — which ended in late 2007 — which sometimes kept my mind whirling.  I’ve also recently seen some news stories that the glow from electronics can have a sleep effect, and around that time, I was trying to find a clock radio to replace one that had died; I went through three before I found one that didn’t keep me away from the glow, so that may have had an effect as well.  Hmm, I was also in the middle of an unhappy period at work then.  Man, it all piles up, doesn’t it?

Trying to find something that would help (other than drinking myself to sleep), I resorted to counting sheep, something which I had also pooh-poohed before.  But when you’re desperate, you’ll try anything.  So I imagined up a setting with a pasture and a fence for the sheep to jump over, but something very cartoony and almost a stage setting with cutouts of trees and clouds, a lot like one of those late 50s/early 60s Bugs Bunny cartoons.  (Wish I could find a pic.)

Out trotted the first sheep — white and puffy, very cartoony, little blinky eyes.  He trotted over to the fence, jumped it, and trotted off stage.

The next sheep trotted on, jumped, trotted off.

The next one trotted on, jumped, didn’t quite clear the fence, scrambled over, and trotted off.

This continued on for several more sheep, each having progressively more difficulty getting over the fence.  Some tripping over it, some squeezing between the bars, etc.  Still not sleeping, I rolled over, from my right shoulder to my left.

Suddenly the stage flipped 90 degrees in my head!  The next sheep plummeted from the right side, smashed into the fence, and bounced over and fell off to the left side of the stage!  And another and another followed it!

Fuck.  I think I got up and had some cocoa with peppermint schnapps in it at that point.

These days, no cartoon sheep die to put me to sleep.  Instead, I start at 100 and count my breaths backward to 1.  Usually somewhere in the 80s, I’m off.  Sometimes I come back to awareness that I’ve stopped counting and I pick up again where I think I left off.  If I make it to 1, I roll over and start back at 100; if I make it to 1 a second time, I give up, get up, and do something else to shut my brain down.


I was standing near a swimming pool, wearing just a pair of cutoff shorts, and I had my iPhone in the pocket.  Suddenly someone started to piss on me, and on the pocket where the phone was.  Shortly, I was separating the layer of the phone and laying it out on a counter to dry, using a handheld hair dryer to hurry things along.

Note that I got a new iPhone on release day, just a couple weeks before, and I was heading to Palm Springs the next day, for a weekend to be spent around swimming pools and such.  Also, I have previous had phones doused in liquid (although not that from the dream), and did try the hair dryer trick to rescue one.

Email ThisBlogThis!Share to TwitterShare to FacebookShare to Pinterest
Labels: dreams 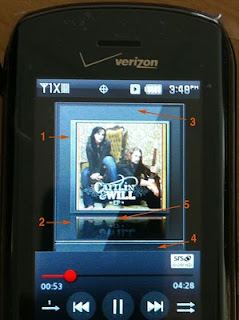 Check out this screenshot from the music player on a not-yet-released phone.  (That’s a perk of my job, getting to test our software interactions with unreleased devices.  So no, I’m not going to tell you who the phone is by, but Verizon is their carrier.)

Apparently, it isn’t enough to just show the album art.  No, you have to make it way cooler than that:
They could have saved processing resources and given the user bigger art if they just did art and maybe its reflection.  And no one would have ever wished for more.

Apologies to country artists Caitlin & Will who get caught up in this example.  (Then again, the duo broke up in late 2009 after releasing one single and having their album pulled.  Sigh.)  But here, go listen to some music from them.

Email ThisBlogThis!Share to TwitterShare to FacebookShare to Pinterest
Labels: computers, country music, What were they thinking 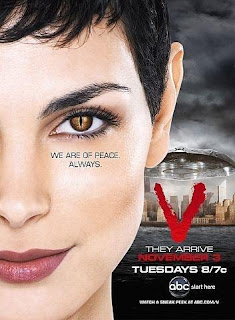 I was crazy for the original V mini-series, and V: The Final Battle (the sequel mini-series), and V: The Series (the 1984 TV series).  (Never bought the comics, though.)  Diana was a bitch goddess, Crystal Carrington for the truly man-eater set.  And the fact that I still remember the half-alien girl’s word for peace — “pretanama” (spelling per Wikiquote) — says the show stuck with me in deep ways.

The reinvention is adequate, carrying forward many of the tropes of the original show — lizard aliens disguised as humans coming to Earth allegedly in peace but really with an ulterior motive, human teenager falls for a Visitor, 5th Column rebels with Visitor allies on the inside, TV newscaster blows off ethics to get the inside track on Visitor news, and so on.  And they’ve ditched the Nazi subtext, replacing it with domestic terrorism.  (On the other hand, they also dropped the squick-inducing eating of mice, which was way cool in the early 1980s.)

I have a natural soft spot in my heart for Agent Erica Evans, played by Elizabeth Mitchell, such that I always think of her as Juliet (from Lost), and the actress carries some of the underscores of that character into this role.  (I keep helfway wishing agents Mark Benford or Dale Cooper would show up, though!)  And there’s a weird attraction to Scott Wolf as newscaster Chad Decker, since he is visually reminiscent of Michael J. Fox, who played a newscaster covering an alien invasion in Mars Attacks!

Some of the acting is top drawer, especially most any scene with Mitchell.  (I really liked the eye movements she made in a scene at the FBI office when they are watching a press conference on TV and she knows it’s all a lie.)  And Morena Baccarin as Anna is just so slimy, she just about reaches Diana heights (Anna, Di-ana, mmm).  I am also intrigued by Christopher Shyer as Marcus.

(Although speaking of eye movements: can we skip the edge-of-romance meaningful looks between Father Jack and Erica.  Priests shouldn’t be on the make.  Eeewww.)

I get unnerved by the cinematography on the Visitor ship, which uses green/blue screen backdrops constantly, but almost all of them slightly skewed or with wrong perspective.  Is it shoddy work or is it intentional to emphasize the alienness?  I can’t be sure.  (But if I question it, that means that the effect has broken me out of the story and thus the question is answered: even if it is intentional, the result is shoddy work.)

But the real problem I have is that just about every episode has me all but screaming at the screen: “That makes no sense!  How can you be that stupid!  Why doesn’t anybody say something?”
These things drive me up the wall, and not in the sense of “What does it mean?  I’ll have to keep watching!” from Lost.

I see the show has been renewed for a second 13-episode season.  Jesus Christ, please fix these fucked up plot holes!  (Yeah, I’m praying to Jesus to do it since I don’t think the writers will.)

What Were They Thinking?
— Cardboard Cutout Donuts 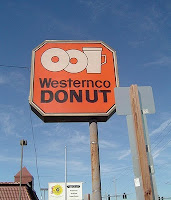 A handful of storefronts for this old school donut and coffee shop chain survive in the Seattle area, along with a few signs which no longer go with active businesses.  (There is one such sign near where I live — the business is now a laundromat, I think — and I pass by it a few times a week.)

I have no idea if their donuts and coffee are any good.  I only know that neither the logo — are those donuts or CDs? — nor the business name inspires me to stop in and find out.

Gotta be in the running for Worst Logo Ever, especially since it’s for a full chain, not just a one-off thing.

(Swiped the photo from someone's Flickr stream, because summer tree growth prevent me from getting as clear a pic of the sign near where I live.)


I’ve finished incorporating the January–March, 2003 posts from my old “Bouncing Off the Walls” blog into this one.  (Actually, they were all from March 2003, when I started that blog, but I have it archived in 3-month chunks, so future incorporations will cover a quarter at a time.)  In the process, I’ve re-edited all the entries, corrected weblinks, and such.  I was pleased to find that very little in the way of revisions were needed, and I’m still happy with the politics-oriented stuff I wrote at the time.

For those interested in what I was writing about at the time (mostly What Were They Thinking? items and a number of posts about the then-new Iraq War), you can read them here:

A few of the sex-related posts are on my other blog, here:

(Oh yeah, and the addition of those posts has put me past post #200 on this blog.)


There is an increasing conflict regarding gay pride parades and the sometimes over-the-top, edgy behaviors sometimes exhibited at them.  This conflict has increased in recent years with the rise of the gay family, including young children — some people want the behaviors restricted due to the presence of children (and some want them restricted because of the presence of straights and the media), which of course pushes some people to go more extreme.

The push/pull of this is felt very strongly by the Leather Community.  Already branded as sexual outlaws and oddities by both the straight worlds and the mainstream gay world — a branding embraced by many in the community, and played up accordingly — leatherfolk are heavily in the spotlight regarding this issue.  How do we (legally) present our edgy play and sexuality in a way that doesn’t sideline or minimize it?  In other words, how do we express our pride?

How pleasant, then, to read this article about the Stanley Cup being exhibited during Chicago Gay Pride, and especially this not-quite-a-quote regarding the pro hockey player (and his wife) who is bringing the Cup to the Parade:


When the [Blackhawks professional hockey] club passed along the request to players, Sopel and wife Kelly volunteered.  The couple doesn’t plan to bring along their kids, saying the festive, sometimes-bawdy atmosphere might be a little too chaotic.

Amen.  Here’s a couple who apparently gets it: the Gay Pride Parade is a party for adults.  There’s nothing wrong with a bawdy atmosphere, but it isn’t appropriate for kids.