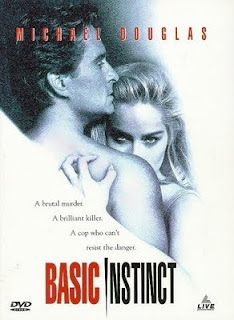 I finally saw Basic Instinct (1992) this week, thanks to the wonders of Netflix.  This film had been on my “Don’t Watch” list for the last 20 years.  Due to the gay protests over it when it was being filmed and released, it was a big no-no to support this horrible anti-gay film about an ice pick-wielding bisexual murderess.

I moved to the San Francisco Bay Area (to San Jose, an hour south of San Francisco) in August 1990, at age 23.  I had come out over the previous year in Eugene, Oregon.  I think my first trip to San Francisco proper didn’t occur until November or December of that year, for a Silicon Valley gay techies dim sum brunch.

(I still remember walking up the stairs into the cavernous dim sum restaurant, not knowing what anyone who would be there looked like.  I scanned the entire place and figured that the table of white people must be those there for the brunch.  And then saw many other people in the next half hour come up the stairs and do the exact same thing.  This was back in the days where we knew people online pretty much only by their name and e-mail address; there were no social networking or cruise sites where we could see a photo.)

Soon after that, I was regularly coming up to San Francisco at least once per weekend, to country dance at the Rawhide II.  After I joined the San Francisco Saddletramps a year later and eventually moved to San Mateo, halfway up the peninsula, my trips to The City would be three or four per week.  San Mateo was a great place to sleep, but a lousy place to have a gay life.

One of the first pieces of gay political activism that I remember was the stuff surrounding Basic Instinct, although as one of the first, it’s also something that I only have hazy memories of.  The biggest memories I have of the time are the involvement of the activist group Queer Nation, and that the gay country bar Rawhide II was used as one of the sets in the movie, and gay activists did drive-by paint bombing of the front door because of the “sell out” nature of the owner and the business.

Ray Chalker, the owner of the Rawhide II and the Sentinel gay paper, eventually earned himself a worldwide reputation as a jerk — I was once in Florida at a gay country-western dance event and met a couple guys from London who said “You’re from San Francisco?  Do you know the owner of the Rawhide?  We hear he’s a complete asshole” — but now I wonder what portion of this might stem from the Basic Instinct stuff?  That is, while running both a newspaper and a bar already put you at odds with some people in the community, when you get publicly branded as a sort of a traitor to the community and members of the community conduct repeated vandalism against your business, I can see how that changes your view of the community; you start to mistrust motives and you become a degree less pleasant to work with, and that can certainly spiral in intensity over time.  Add in the gay community’s institutionalized memory, where we hold grudges and refuse to take actions for years after the reason to do so has evaporated — like the Coors Boycott [see here] [and here], or dare I say it, avoiding seeing the movie Basic Instinct — and it’s easy to see an unfocused perpetual animosity toward Chalker and the Rawhide II festering in the community for years, continually being reinforced by Chalker himself in the way he reacted to things.

(On the flip side, Chalker’s anger and behavior eventually resulted in the creation of the Sundance Association for Country-Western Dancing, a strong non-profit which “owns” and directs the Bay Area gay country community now long after the Rawhide II ceased to be a gay country bar.  And Sundance has been an inspiration and model for Seattle’s Rain Country Dance Association, which formed after we lost the Timberline as a dance location up here.  Mmm, there’s a lot of stuff thet we can tag as possibly having some roots in this movie!)

Part of the fun with this movie, as with any one taking place in a familiar-to-you city was in identifying where things occur and what has changed since then, such as:
Also fun was freeze-framing the scene in the country bar (scene 18), which according to the DVD notes featured as many as 100 of the bar’s regulars:
20 years down the line, and with early 90s AIDS in the mix, a few other people looked familiar, but I couldn’t identify any of them by name.

Taking joy in adding to the pain of others via exaggerated and even ridiculous online comments.
A portmanteau of “blog” and “Schadenfreude”

Sure, when you feel compelled to comment on the latest trend or meme, you have to have your own spin, but if there’s truth in the Thumper Rule (“If you can’t say something nice… don’t say nothing at all.”), then there needs to be a corollary: “If you must say something mean, you don’t have to be meaner than everyone else.”

Posted by Jim Drew at 11:08 AM No comments: Links to this post

Any word which has no known rhyme (in the same language).  A portmanteau of “prime” and “rhyme”.

Thus, a “prhyme” is a word whose only rhyme is the word itself.  (Maybe there should be a word-equivalent of the number 1, which rhymes with everything?  I guess it would be <whitespace>.)

(Looks like Prhyme is also the name of a metal/ska band and a rap/hip-hop artist.)

Posted by Jim Drew at 1:24 PM No comments: Links to this post

Poor Adobe Reader.  There, there.  It's okay.  Stand up straight and just try.  You can do it!  I know you can!

Posted by Jim Drew at 11:48 AM No comments: Links to this post