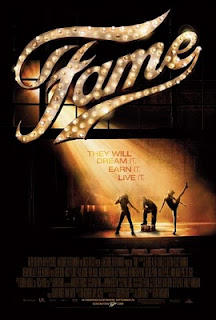 I got to watch the recent remake of the early-80s musical film Fame recently, on the flight back from Sydney to Los Angeles.  And my first reaction was “Why did they bother?”

This site has a good summary of the original movie, what worked about it, and what resulted from it.  I only saw the original for the first time a couple years ago, via Netflix.

I suppose the answer to my first reaction should be “Why wouldn’t they bother?  This was a transformative movie in the 1980s, so it could be again.”  (To which your response should be “Yeah, sure it could.  Suuuurre it could.  That trick always works.”)  The real answer, of course, would be “Everything old is new again.  Here’s a former majorly successful property that isn’t bringing in any money.  Let’s bring it back!”

Fame is hardly the first 20–30 year old “property” to be brought back in recent years.  And after all, if you see this as a movie intending to attract teens to the performing arts, then it needs to have today’s sounds, today’s dances, and today’s problems in it, not the ones from 30 years ago.  The movie needs to be relevant to have an impact (or so the theory goes).

So why/where does it fail?  That’s hard to say.
In the end, I can’t quite decide: did the movie fail (in comparison to the original) because it reached too high, tried to do too much, and couldn’t match what it was being compared to?  Or because it didn’t reach high enough, because it was too constrained by budgets and time limits and the like?


Two more things occurred to me last night with this: