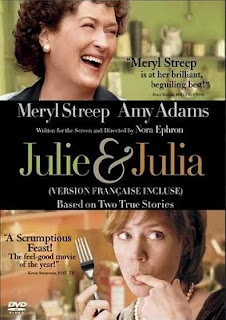 I watched Julie & Julia in two approximately equal chunks almost two weeks apart, on the Emirates Air flights from Sydney to Auckland and back again.

(As an aside, I had no problem with breaking the story in two like this.  I often watch movies and even hour-long TV shows in chunks of 10–15 minutes at a shot: a bit with dinner, a bit with dessert, a bit while folding laundry, etc.  My boyfriend is a bit boggled by this; if he can’t dedicate the time to watch the entire thing at one sitting, he’ll wait until later.  I guess I can chalk this up to reading comic books: over the course of 30 years, I am incredibly used to reading a 4, 6, or 12-part story in 22-page chunks, with 30 days between chunks, so I’ve gained the skill of being able to recall sufficient details to re-immerse myself in the story with ease.  See: more proof that reading comics makes you a superior human being.  It strengthens the memory!)

Back to the movie, the story involves a woman deciding on a project to do all the recipes in Julia Child’s Mastering the Art of French Cooking over the course of a year (and to blog about it), intercut with a biography of Julia Child as she developed her passion for French cooking and worked on the book.

Thoughts:
In the end, the film pretty much peters out: Julie finishes her year and Julia gets her cookbook published.  Not much tension, not much drama, and no special effects with an alien armada making the souffle drop.