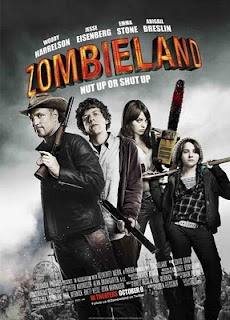 I am so bored with zombie movies (and comics, and…).  The creatures are so one note — “Brains!” — that the entire genre comes off that way.  Most of the variations seem to be just a tweaking of the details: zombie super-heroes (maybe even zombie super-heroes in space), zombies in a shopping mall, zombies at the North Pole.

(Wait, that was vampires at the North Pole, wasn’t it?  Brains, blood, who can keep them straight?  Not Anne Rice, for sure.)

Which should make it no surprise that somebody did a “funny zombies” movie.  The surprise is that Shaun of the Dead didn’t bore me.

Okay, while Shaun of the Dead is shot through (and it keeps shambling forward, hah!) with British humor, Zombieland is thoroughly embedded in two standard aspects of American film: teen angst and guns.

Thoughts:
Ultimately, though, only one thing was needed for me to approve of this film, and that’s Woody Harrelson’s character’s dislike of coconut — “I hate coconut.  Not the flavor, but the consistency.”  Amen.