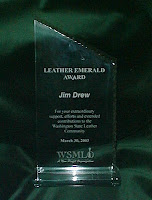 Sally Field-isms aside, I’m very proud to be one of the recipients of the 2003 Leather Emerald Awards, presented by the Washington State Mr. and Ms. Leather Organization.

The award recipients for Community Service are the Capitol Hill Alano Club, Paul Best, Guppy’s, the Seattle LGBT Center, and Miss MeMe.  The other Leather Emerald Award recipients besides myself are the Seattle Eagle, Gene Romaine, Bill Manning, and Corky D., plus awards from the 2002 titleholders to Tim Parsons and Mark Colter, and the National Leather Emerald Award went to Sandy “Mama” Reinhart.

[Weblog title reference: From Sally Field’s 1984 acceptance speech for the Best Actress Oscar for Places in the Heart.]


Over the course of the next couple years, I also received Man of the Year awards from Seattle Men in Leather, Generic Leather Productions of Washington, and Seattle Boys of Leather, followed in 2006 by a Pantheon of Leather / Northwest Region award.

Email ThisBlogThis!Share to TwitterShare to FacebookShare to Pinterest
Labels: leather