What Were They Thinking?
— One State, Two State, Red State, Blue State 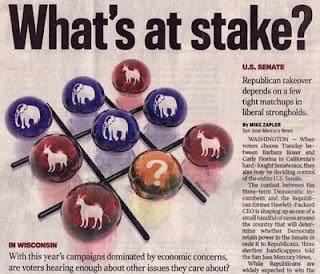 This showed up on the front page of the Sunday edition of Wisconsin State Journal, just a couple days before election day.

Curious color selections, since it’s usually blue associated with Democrats (donkeys) and red with Republicans (elephants).  I can’t find the original image at iStockPhoto, but I expect that the newspaper added the animal images and didn’t think through the implications.


This article at Language Log has interesting details on red state/blue state, and links to this more in-depth one.

Basically, the television networks alternated which party had red or blue between 1976 and 1996, which lead to the Republicans being assigned blue five times out of six.  The current color-to-party linking (and the “red state/blue state” terms) only dates to 2000.

You’d swear it was older than that, wouldn’t you?

Email ThisBlogThis!Share to TwitterShare to FacebookShare to Pinterest
Labels: politics, What were they thinking