Stuff I Read: A Distant Soil, by Colleen Doran 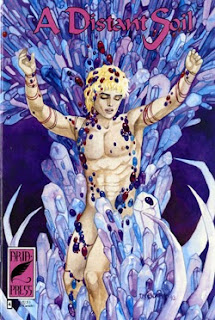 A Distant Soil is a long-running sci-fi/fantasy comic book by Colleen Doran.

Started when she was a teenager back in the 1980s and restarted from the beginning a couple times since then, A Distant Soil features a pair of teenage kids — Jason and Liana — who have been drugged up and locked in an asylum/test lab/government facility for several years due to their psychic powers.  During one flare-up, Liana’s powers contact an alien race called the Ovanon, causing a race between various political factions of their upper class (the Hierarchy) to catch and control (or maybe kill) the kids.

One of those factions is connected to an underground rebellion which seeks to overthrow the power structure of the Hierarchy and depose the ruling Avatar.  Their representative gathers Liana — who turns out to be the child of an Ovanon exile — and a crew of other humans (and some non-humans, including another Ovanon exile and the time-displaced Arthurian knight Galahad!), intending to use them to bolster the rebellion.  What neither the rebellion nor the humans realize is that the rebellion’s representative is… but that would be telling.

What makes A Distant Soil so compelling beyond the story and the layered characterizations (and those would be enough!), though, is Doran’s art.  Steeped in both the best richness of classic Japanese manga (take note: I don’t mean the “speed lines and huge weepy eyes” stuff people tend to associate with the term “manga”) and flowy fashion-heavy illustration along the lines of Erté and Aubrey Beardsley, Doran’s art in this comic is fine lined, expressive, detailed, deep, and heck, the word for it is “beautiful”.

A number of comic books featuring grand themes, vast world building, and novelistic scope premiered in the 1980s and 1990s — A Distant Soil, Elfquest, Bone, Strangers in Paradise, and others.  While forced by the nature of the comics industry to release their stories in roughly 20-page increments — and those are sometimes released months apart due to what underfunded small press/self-publishing companies can manage — these stories have tended to read best in large chunks, in the trade paperback collected forms, where you can sit down to 150 to 300 pages at once and read it not unlike a text novel.  In that form, the themes and foreshadowing and repeated elements come through as they were intended.  As you can imagine, that intent gets muddy and lost when you read only 20 pages, only twice a year.

Today in the world of the web, Doran is presenting the comic again, usually a page every couple days.  This is almost as good a way of consuming the comic as in book form, where even if you are all caught up and reading the pages just one at a time as they are released, the recent pieces of the story are still fresh in your mind.  (But I still heartily recommend them in book form, too: more permanent and the best possible reading experience.)

I think Doran is just about caught up to the last printed issue (I’m still a few months behind in reading, a few pages at a shot, a couple times a week), and there are supposed to only be a few issues to go before the story is done.  Not that the rich universe she has built couldn’t provide her with a hundred new stories to tell.  I hope she tackles some of them!

Email ThisBlogThis!Share to TwitterShare to FacebookShare to Pinterest
Labels: comics, Stuff I read