Does This Shirt Make Me Look Non-Fat?


About a month ago, at our Friday dance night, I had no less than three people ask me if I had lost or was losing weight.  In one case, it was “Looks like the diet is working.”  Another theorized that all the dancing I had done (must have done) at Sundance Stompede the previous weekend must have had an effect.

These comments kind of threw me, because while I have been gradually losing weight for almost three years now — close to 30 pounds to date, but only maybe 5 pounds of that in the past year — I haven’t tried to lose the weight, I just have.  No particular heavy diet involved.  But there are some things I can target here.

Three years ago this month is when Rusty and I broke up.  At the time, I weighed about 220 (maybe even 225), weight which had crept up over the previous 7 years living in Seattle.  Some (but only some) of it was attributable directly to being in a relationship — you’ve probably seen it many times, where people connect up, settle down, and expand to fill the couch space available.  When the need to be svelte to attract a partner goes away and the diet either doesn’t change or even increases in bad ways due to more stay-at-home activities, weight goes up.  (I’ve seen guys add on as much as 50 pounds in a year or two this way.)

In no way am I blaming Rusty on this front; he gained some at the same time I did.  But after we separated, I was no longer buying and cooking for two (three when his daughter had lived with us), and I also stopped eating out as much.  By the end of the next summer, I was down to around 205 pounds.

While I was dating Cliff, it was a different situation.  We didn’t live together, my activity level had already gone up (see below), and with his thinner build, he was more aware of (more paranoid about?) the potential for getting a gut.  So during that relationship, my weight actually continued to go down a bit at a time.  18 months along (spring of this year), I was a bit above 195 lbs.

I made two notable lifestyle changes over the past three years which may have had an effect.

First, I bought a scooter in April 2008 and turned it into my primary form of transportation.  (Over 13,000 miles in 2.5 years now, more than double what I’ve put on the car.)  This has added some upper body strength, perhaps, from manipulating the scooter on and off its stand.  It has definitely improved my core muscle strength and improved my posture, by not having a seat to slump against for support.  And being in the fresh air (and wind) more has perhaps helped my breathing and I think it has improved my resistance to colds and my recurring bronchitis problem, and that all could have some small effect on the weight.

Second, a couple years ago, we shifted Rain Country’s twice-monthly Wednesday dance nights to be all line dance.  Line dances — especially when you dance almost every one — provide really good exercize and increased heart rate and such.  A year ago, when the dance team went on hiatus from Wednesday practices, we expanded the line dance nights by an additional hour, giving me that much more activity.  (I lost some exercize from the dance team hiatus, but it is made up for by more line dancing.)  Further, I have been pursuing line dance competition — even travelled to Copenhagen to compete in the OutGames — which has probably helped even more by giving me increased focus on posture, core muscles, and so forth.

I’ve also significantly increased my sexual activity level as well, especially some practices which focus on muscle tone and muscle relaxation.  A couple hours of getting sweaty and getting your endorphins up is good exercize, and when you get that 2 or 3, sometimes more times a week… it’s got to be a boost for weight loss.  (Yeah, I’m bragging a bit.  But it’s true: I’m getting more sex these days than I ever did in my 20s or 30s.  To co-opt a phrase, “It gets better.”)

As I said earlier, I haven’t actively sought to lose weight, at least not in the “go on a diet” sense.  (Nor in the “do physical activity that doesn’t appeal to you” sense.  It’s much easier to up your activity level if it’s something you like to do, something that you don’t start doing because you “have” to.  Gym workouts failed for me in the past; if I have to make time for it and force myself to do it, I’m going to find ways to avoid it.  And I always did.)

I did make three small changes in my eating habits, though:
Except for the sugar/Splenda switch, I haven’t swapped out ostensibly high calorie items for “lite” ones, however.  I use real half & half in my coffee.  I eat bacon and eggs.  I use real maple syrup.  I use butter.  I cook with butter and with bacon grease.  (Date a southern boy and you’ll learn this!)  While losing some weight is a good thing, there is a trade-off: how much suffering are you willing to endure?  How much joy (and flavor!) are you willing to suck out of your life?  And what comes along with switching out real food for chemically engineered replacements?

If you need to lose large amounts of weight in a short period of time, those trade-offs may be worth it.  But for me, I am happier with a slow loss of weight combined with a minimal loss of joy.

Right now, my weight is down in the low 190s, depending on time of day, recent meals, and so forth.  What is especially cool about that is that this is lower than I have been since before I moved to Seattle, ten years ago this weekend.  That thrills me: it’s rare to be in better shape than you were a decade ago.

I’m able to now fit into medium t-shirts again.  (Well, some of them.  Some are not just smaller, they are shorter, and I can’t wear them tucked in.)  I’m buying 34-inch waist jeans again; I have one pair still at 36, which I’ll wear until they wear out.  (Thinking back, pants were one of the reasons I did make the small changes that I did.  I noticed that my jeans, which I had always worn tight, were no longer conforming to my body.  Instead, they were feeling like loose bags belted to my waist; they covered rather than clung, and I didn’t like it.)

I’m able to wear my original pair of leather chaps again, although they are still damn tight such that I can only wear them without pants on underneath.  (They are tighter in the thighs than in the waist, actually.)  Give that I bought them 19 years ago, when I had a 28-inch waist and had barely started country dancing (which is what expanded my thigh measurements), being able to get into them at all is cool!

Why It Threw Me

When I “grew up gay” (that period of about the first 5 years after you come out), I lived in the Bay Area.  It was the early 1990s.  AIDS (and fear of same) was abundant.  AZT was the only AIDS drug around.  If someone in gay circles lost a noticeable amount of weight and they hadn’t been chatting about diets and major exercize changes — or gastric bypass surgery — then you knew what was up.

Of course, no one then would ever approach someone and ask if they had tested positive or even if they were just generically “sick”.  The best you could do was verbally observe the symptom and then let them respond about their health status if they wanted to.

I had little idea that that stage of my life still had such heavy coloring for me, but I realize that I was shocked by having several people observe that I looked thinner because of the inferred subtext that they were fishing to really ask if I was all right or if I was sick.  (I don’t think they were asking that, I just subsconsciously interpretted it that way.)

Why I Actually Got the Comments 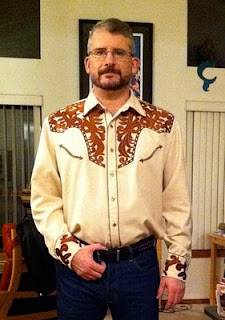 As it turns out, the main culprit in why I got several comments that night has less to do with whether I’ve lost weight recently and more with what I was wearing.  A couple summers ago, after winning a line dance competition in Tampa, I bought a nice Western shirt as my personal “prize” — cream colored fabric with a massive amount of copper brown embroidery across the chest/shoulders/back.  It is an XL shirt, but that was the only size they had and I really love it.

Now that I’m down to the low end of Large again, that shirt practically hangs on me and makes me look skinnier than I am.  (I remember a girl in high school who did that, wearing big baggy shirts to make herself look thinner.)

I guess I should be happy that people do notice these things.  But I’ve absolutely got to get that shirt tailored to better fit me now.