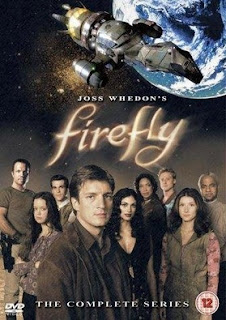 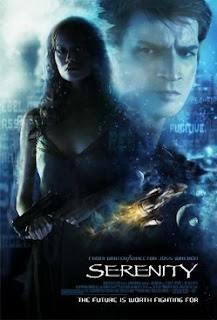 A couple years ago, on a trip to Canada, my boyfriend picked up a copy of the Firefly boxed set at a thrift store, telling me how good it was.  We proceeded to watch the first disk’s worth of episodes the next few times I was at his place, but then he had a break-in where his big screen TV and most of his DVDs were stolen.  The TV and some DVDs were later recovered, but not this set.

I added the set to my Netflix queue, and eventually finished them a month or so ago, plus the follow-on movie, Serenity.  (Particularly of note in the boxed set is that it includes a handful of episodes which did not get aired during the half-season run of the TV show.  A must for anyone who enjoyed the show.)

In no way am I about to become a Browncoat (fan of the show) and rave about how it is the best television show ever.  (Sorry.  That would be Twin Peaks.  Or maybe Lost.  Or I’ll accept The Dick Van Dyke Show, if someone insists.)  And I won’t ever quote lines of dialogue or do Firefly cosplay.  (I will drool over Jayne a bit, though.)

Actually, it took several episodes for me to warm up to the show.  The first disk’s worth, it was simply okay: solidly a “Western in space”, with an intriguing mix of conflicted characters and unrevealed pasts.  Good enough for what it was, but not necessarily anything I would have pursued weekly if I randomly tripped over an episode.  By the end of the second disk, though, I was solidly interested in the show, because it was interesting, different, and engaging.  By the end of the boxed set, I was invested enough to be bummed by the doomed nature of the show.

The Serenity movie, though, is a must for fans of the show.  (Hard to say if it hangs together adequately by itself without the background of the television show.  I rather suspect that the Inara and Shepherd subplots would be pretty obscure.  But this definitely didn’t come across as just a double-length episode of the show, like some Star Trek films did.)  There were two big unanswered questions left over from the show — what are the Reavers, and what the fuck is up with River — and those both get answered in the movie.  (Or at least resolved.  I still have no idea why they did what they did to River — it felt rather like they came up with a solution and then stitched it backwards into her character to pretend it was the cause — but the subplot gets resolved, which is sufficient.)

The scenes with Serenity passing through the Reavers were very well done, a space battle/ballet which brought to mind the attack on the second Death Star from Return of the Jedi, but doubled.  And although I mourn (NON-SPECIFIC SPOILER) for the characters who died in the film, I also appreciate that Whedon did kill some of his precious children, making the story that much more heart-felt.

And a nagging non-question from the show — where does this actually take place, how big of a “universe” is it set in — also gets answered.  We’re so used to Star Trek and Star Wars, where the ships blithely skip all the way across the galaxy, that it was a bit of a shock to realize that the entire show occurs in a single solar system (albeit one with a couple dozen planets).  This information changed the perspective I had on the show a little bit, making things a lot more plausible for the characters to periodically run into people they knew.

(One thing that did annoy me with the extras on Serenity were the repeated comments that the movie was very special in that it was a movie based on cancelled television show, and that never happens.  Well, never since Twin Peaks: Fire Walk With Me, thirteen years before.  And double never since Star Trek: The Motion Picture, thirteen years before that.  So yes, it’s rare, but hardly unknown.  Or “thirteen years” is the definition of “never” in movie land.)

Now Dark Horse Comics is releasing collections of their Serenity comics.  Amazon, I’m coming for you.  (But still, no brown coat.  I promise.)