What Were They Thinking?
— To Preserve A Severed Extremity Until It Can Be Reattached, Pack It In Ice 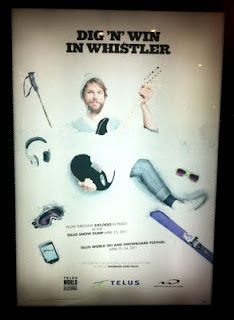 This ad for a contest at the Telus World Ski & Snowboard Festival was on bus shelters in Vancouver, BC in early April.  Take a peek at that leg’s position.  Poor guy: it got ripped clean off in the avalanche.  He must be in shock and numbed from the cold, since he’s not reacting to the amputation.

Aware of the sensitive nature of the image, they declined to show the severed leg on the contest’s Facebook page.

Email ThisBlogThis!Share to TwitterShare to FacebookShare to Pinterest
Labels: advertising, Photoshop, What were they thinking