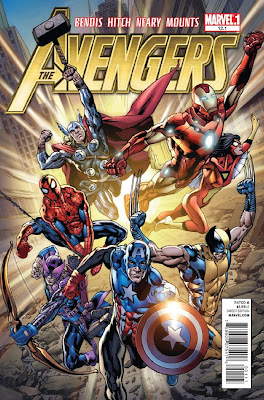 So how long is his wingspan?  Apparently wide enough from elbow-to-elbow to go from one side of Iron Man to the other side of Spider-Woman while they are flying alongside one another.  One twitch of his arm and she’ll lose her armpit webbing.  (Click the image to see it full size.)

(Wolverine’s head is obviously bent forward here because Spider-Woman just kneed him in the back of the head.  Although that also means she must be only about 4' tall, if knee to armpit is only as long as Wolverine’s head to claw.)

The obvious explanation is that Wolverine has a new mutant power along the lines of Mr. Fantastic.