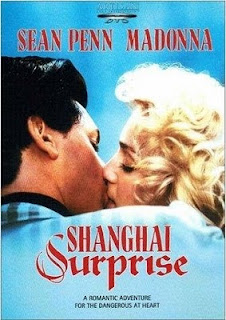 I recently bought the DVD of the 1986 Madonna/Sean Penn film Shanghai Surprise for $4 from a bin at a local drug store.  (I also bought Shut Up & Sing, Kinsey, the 2007 musical version of Hairspray, Larry the Cable Guy: Health Inspector, and maybe a couple others.  They were cheap, how bad could they be, right?)

I had to ask.  Oh, this one was painful to watch.  It involves a missionary hiring a ne’er-do-well to help her find a million dollars worth of missing opium to be used as medicine, dealing with corrupt police, gangsters, and high class prostitutes along the way.

(It was made worse by the George Harrison soundtrack.  Not much good music in the film.  I had thougth this was the movie that Madonna’s “Live to Tell” song came from — that was really why I bought it — but that was the other 1986 Sean Penn film, At Close Range.  Damn, what was Madonna thinking here?  At least get a hit song on the soundtrack, woman!)

The settings — filmed in Hong Kong and Macau — aren’t bad, but the story is full of holes and oddities like why they needed to hire someone in the first place and how Madonna’s missionary character had all the money she was throwing around (and why she wasn’t just buying opium with it instead).

Beyond that, there are two major problems with the film itself:
What salvages this DVD, though, are the extras, which were put together some 15 or 20 years after the fact.  In addition to a “Madonna in 1986” piece with a couple media mavens discussing her career up to and after that point, there is one with the writer and one of the actors discussing the film and the problems it had (including the crew nearly rebelling due to [pri]Madonna), and another with several comedians talking about their favorite and least favorite parts of the film.  If you felt embarrassed for the actors or felt guilty about mentally savaging parts of the film, you’ll find these people agreeing with you just about point for point.

Any fan of campy, terrible movies will tell you that viewing the movie as a shared experience can help salvage (rather than “savage”) it — you have others to discuss, commiserate, and moan with — and sometimes can even elevate a piece of shlock into a form of art.  (Hello, Rocky Horror Picture Show!)  This one will never make “art”, but it maybe can be enjoyable pain when shared with others.