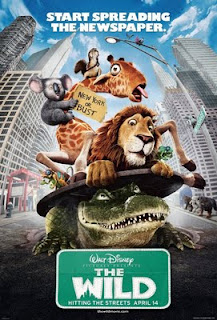 When The Wild came out, I was right there at the head of the pack, saying that their tagline should be “Hey, we can do Madagascar, too!”  (That is, "Madagascar 2”, as though it were a sequel to a much more successful computer-animated “New York zoo animals escape to a wild jungle island” movie from about a year before this.)  In reality, I realize that it was probably in development well before Madagascar came out, perhaps even with completely separate influences.  (See the comics industry releasing X-Men and Doom Patrol or Swamp Thing and Man-Thing at basically the same time.  It’s a form of “convergent evolution”.)

I finally saw it (via Netflix), and my quip was both wrong and very right.

First, the character designs for the animals are some of the most realistic we’ve seen when it comes to a fully computer-animated film.  In comparison, the animals in Madagascar are roughed-out cartoons.

Second, the thrust of the plot is a bit more organic and adult-friendly, with the kid being upset at his father, running away and getting in over his head, and the father and friends setting out to rescue him.

But then we have the turtle curling match, and the animals steering the ship (sorry, but the penguin cell in Madagascar, while not any more believable, was at least funnier), and the breakdancing, and the dance choreography of the wildebeests.  Once you get into these facets, then the cartoony nature of the Madagascar animals becomes more warranted… or if you prefer, then the realistic character designs break hard against the non-realistic actions.  And since this occurs repeatedly throughout the film — it could be somewhat excusable only at the front and back as a framing sequence — the viewer is constantly shoved back and forth.

(It’s also interesting to examine that movie poster, because it’s not very representative of the film.  It implies everything occurs in New York City, it paints the characters are more cartoony, it is missing two of the main characters, and it positions the dogs and alligator as much more significant than the three minutes of the film they actually appeared in.  Almost as if they were trying to paint the characters as more like those in Madagascar, but to distance the plot from being seen as similar.  The Wild only brought in about 15% of what Madagascar did; in fact, it only brought in half as much total as Madagascar did on its opening weekend.)