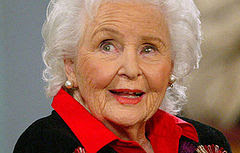 Frances Reid, the actress who played matriarch Alice Horton on the long-running soap opera Days of Our Lives died this week at age 95.

(That’s a damn good run for anyone!)

Although I haven’t watched the show for years, I was a very faithful watcher in my late teens and 20s.  My first episode was Bo and Hope’s wedding, when Emma burst in to threaten everyone, under the control of the Dragon.  (I think that’s right.  My memory tells me around May 17, 1985, and web research says it was actually May 23 of that year, which might be the date the wedding actually finished; you know how soaps stretch things.)

After that, I was hooked and I watched Days every day for about a decade, missing less than one episode a year.  At one point, I had no TV picture reception where I lived, but I could get the sound just fine, so I would record it during the day and listen to it with dinner, like an old radio soap opera.  (It was months before I knew what the character of “Molly of the Mountains” looked like, and I had to imagine that whole “trapped in a wrecked train car” sequence.)  I was a regular poster in rec.arts.tv.soaps for a few years.  I even have the novelizations of the early years of the show, which filled in a lot of the Doug & Julie backstory.

But back to Frances Reid as Alice Horton.  What brought me back to the show day after day, more than the outlandish plots (like a drugged Marlena acting as the Salem Slasher and killed Alice by choking her with doughnuts, but it was really a plot by Toni DiMera in an exact duplicate of Salem created on a tropical island?  Really?  WTF?  Can’t we get back to simpler times, like Marlena possessed by the Devil?) was the sense of “family” the show promoted with the Horton clan, and Alice as the matriarch.  I fondly remember the annual Christmas tree decorating, pulling out the ornaments with the Horton kids/grandkids/great grandkids/etc. names on them.

In some ways, Alice Horton served as a bit of a substitute grandmother for me at the time, since she looked a bit like my own grandmother.  (Is that weird?)  (My grandmother is still alive, age 88 or so.)  Even though I haven’t even seen her face in over a decade, the Alice Horton and Frances Reid are still there in my heart.

Email ThisBlogThis!Share to TwitterShare to FacebookShare to Pinterest
Labels: television